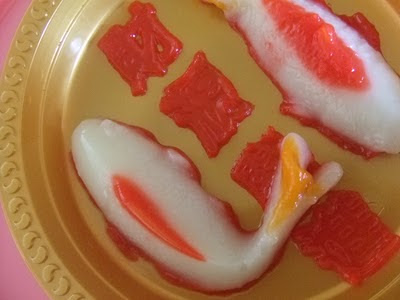 I am finally getting down to catch up on the backlogs - hope I post all the new year goodies before the 15th day of new year!

This is the first time I make a nian gao. In the process of searching for a recipe, I realised that the less I know, the better it would. You see, there are recipe that needs coconut milk, some don't. Some needs wheat starch while others need tapioca flour, some uses a combination of both.... and the differences just go on...

In the end, the exasperated me pick up the simplest recipe which uses neither coconut milk, wheat starch nor tapioca flour. 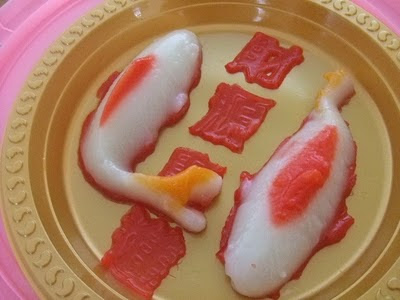 You see the fish on the left that had cropped tail; I had much hard time trying to unmould the fish. The tail was left in the mould.

I then use the more complicated recipe which I pick up from a local food magazine. Then I got the nicer fish on the right.

I put my nian gao out on the table as part of CNY decor - it turned moldy within days. So if you are making these for consumption, do store in fridge and finish up with 5 days (or less).

Usually, the nian gao can be deepfried with flour batter, or sandwiched with yam & sweet potato slice before dipping into flour batter and fry. My mom sliced & steamed them until it becomes soft and gooey, then coat nian gao with grated coconut. Nice.

For me, I eat them plainly. Just leave at room temp until it lose the chill, and become softer. Slice and eat.

You're so brave, to me Fancy Nian Gao or Nian Gao itself is a big project.

haha, it is not difficult lah. If you can bake, you sure can make nian gao.

I find the fancy nian gao less finicky than the traditional.

I realised the trick is to grease the moulds VERY generously with oil. And remove only when the nian gao is chilled.

Cookie
Singapore
A full time working Singaporean mum, domestic or whatnot. This is my space to record my life, food, culinary experience and random thoughts.

10 things to bake before you die

5. Betty Saw's Butter Cookie Use only the best butter pls!

10. Blueberry Muffin with Streusel (eggless) - a versatile muffin recipe that can be adapted to any fruits in season. The streusel is crowning glory!!!

Blogs where I Linger

Add it to your blog

MY MENU (Still under construction...)

Thanks for Visiting my Blog!